If you're on Twitter and have any interest in DIY music discourse, zines, or just some real takes on emo music, then you might know Miranda Reinert. And if you don't, well, what are you doing?

I've loved Miranda's zines for a while now. She creates, publishes, and sells under the name Wendy House Press, and many of the zines available are on the topic of DIY music and community (buy some here). There's Mini Music Mags, which include Miranda's writing on best songs and "forever songs." One zine, Punks Against Playlisting, is dedicated to music discovery (not the Spotify kind). Another features photographs of Chicago music venues - Miranda grew up in the suburbs of Chicago - with accompanying stories and memories. Most recently, Miranda published a digital zine, titled Isolationism is a Zine, featuring work from various artists and writers, spanning poetry, music writing, collages, photographs, and recipes (and my work is in there, too!).

I caught up with Miranda recently, and we had a Google Hangouts call to talk about her zine-making, why you should never use Microsoft Word, the DIY music community, and what's missing from the discourse.

(our conversation has been condensed and edited for clarity)

So when did you make your first zine?

It was spring 2018. And it was a photo zine that I made while I was visiting my boyfriend at the time in L.A. That one is interesting because it's so much more about me than the other zines that I've made. I wanted to do something with my film photos that I’d taken from when I studied abroad. So then, over that spring, I made a zine. I don’t know why I decided to do it. I’d been to Chicago Zine Fest, and…I was alone in Los Angeles while my boyfriend was working, so I decided to put something together.

That’s cool! So then, when did you start making zines about music?

That same year, around September, I had an idea for zine called Presenting. It was a contributor zine, which was really kind of fun. The idea was to send people disposable cameras - which was like the most miserable decision in the end. I didn't finish that scene until April. But it was really cool, and I interviewed a bunch of people about their personal style as related to growing up and developing within DIY and punk music scenes. It was people online that I knew and people I knew from college. It ended up being really, really cool. But, it took forever. But I really liked doing that one and talking about music scenes and sort of the effect of music, which ended up becoming more of a theme throughout what I continued to do.

Is there anything else that you like to write?

No. I do like to write - most zines start off being an essay about me, or as music affects me. I really like doing that. It helps me process how I feel about stuff, how I take in music, and so it’s a way to express myself. But, I don't really do creative writing.

Are there any journalists or other zine makers that you look up to, either now or before you started?

There is a girl named Tori Holder, who I love. I love her zines. Most things that I like, most things that I buy, are usually art zines, mini comics, photo zines - stuff like that. Zines that inspire me in terms of aesthetics. The feel of holding a physical medium, like paper, is so much of why I make zines. I love putting stuff together. And content-wise, people who do Yer Scene are great. Nat and Abe are amazing. I love their pieces in Yer Scene. The focus on local music scenes, I think is so interesting and important. I love what they do as far as content goes and they're inspirational in terms of working with a team of people.

When you are writing about music or making zines, what's your goal? What do you want to achieve?

This might be a hard one to answer - but what do you think is the role of the zine in today’s world, when so much happens online?

I want to help foster writing and more personal aspects of music. Small, independent music, is online so much now, especially online on Twitter. Which I think is much too close to an artist for really strong fan communities to start. The way that Tumblr could foster really strong, independent-from-the-artist fan communities - I’m trying to bring that away from the artist and away from the social aspect. That’s not in the world on a grand scale, but in the world of DIY bullshit.

I think a lot about how - I love Twitter, but I don’t think it’s good for it to be the only space of people talking about the artists they like. I think bands really, really have to support and foster communities for them to happen….I think that’s cool, but I think Twitter is typically too close to the artist, to where sometimes it can be embarrassing to be really excited.

What song or album have you been listening to the last few days?

I’m sort of flipping between the new Walter Etc. record - which I love, it is so good. I’ve been listening to that a lot. And then, Into It. Over It. put back up the split they made with KOJI a long time ago. It was taken off all streaming service for, like, the last four years. They put it back up, and I’ve been listening to that a lot too. It’s my favorite thing in the world - I love Into It. Over It. to an embarrassing degree.

Is there an issue or topic in music in general or in DIY music that you think just doesn't get enough coverage or isn't talked about enough?

I volunteer with an organization in Chicago called Our Music My Body. They do tabling at shows, and work with venues, around sexual harassment and assault prevention and awareness. It seems like to me, probably to you, and to people in a certain sphere, harassment and assault get talked about quite a lot. But it's shocking when I go to shows and talk to people at Riot Fest or Pitchfork, how many people come up and ask, ‘Is this really a problem?’ It surprises me. It feels like it gets talked about all the time, especially online. But it’s a bubble of people who really care about this online. There are all these people who go to shows and festivals, and they come up to me [to challenge me] - and it's almost always at alt or punk shows. When I went to an EDM festival a couple years ago, not one time did anyone say 'oh, is this really a problem?' Because they know it’s a problem. But at Riot Fest, people were aggressive and wanted to challenge you on the issue of ‘is this really an issue?’ So, I think there's a dissonance within DIY and punk spaces. Online, we'll talk about it. But it helps so much to have a physical presence, because then the bands will talk about it. There’s a stark difference between the discourse online and what I see when I go to shows, when I’m talking to people about it and I’m specifically there to talk about it. The dissonance is huge.

That surprises me and isn’t surprising at the same time.

It’s so hard because me and the people who I volunteer with, we’re all people who are part of the discourse online. We do it because we care about it and it affects us. And then, you talk to people and realize how many in a room of 500 people, how many people are in that discourse? They’re not. They're not a part of it online. You’re faced with how not everybody interacts with music and music scenes in the way that like you or I do. And you’re having to face that head on, while knowing that the discussion is happening, but it's just happening in a vacuum.

When Taylor Swift spoke out about getting groped by that radio guy, you can see in the response to her the dissonance between the general population and those really invested in the online discussion. And you can see it in how there are people who have no idea what happened with Pinegrove. People still ask what happened, when it’s been 2 ½, 3 years. That to me is so shocking.

So, I would like to see more bands speak on-stage directly to their crowd about how to be proactive, not in response, to incidents. Like saying that harassment and assault aren't going to be tolerated. Whereas only reacting [to an incident] can only do so much. Talking about these issues brings them to the more general music fans who don't really think about it. And not everyone who doesn't know about it is like a bad person - it's just not something they think about, you know? Most people are just really nice. People don't want to make other people uncomfortable. So, it would be nice to have more proactive discussions from onstage.

How long have you been volunteering?

[Our Music My Body] is awesome. It’s probably one of the things I’m going to miss most about Chicago. I love doing it. It’s a really cool and special thing to have, to have presence in venues. We work with all different kind of music venues and work with the venues directly to make action plans.

So what advice would give someone who wants to zine, who hasn’t before?

Until I started making zines, I never read them. I never read punk zines. I never read Maximum Rock N Roll, except maybe one time when I wrote a paper about Jawbreaker in college. Zines can be whatever you want. Just have fun. I make music zines that you don't have to fit in some kind of mold. Zines can be much more technically intimidating, from what people have asked me. Questions they have are how to actually, like print stuff or make stuff like. Just don't use Microsoft Word. My Scene Classics zines are all done in Microsoft Word - Miserable. Horrible. Having to manually do booklet layouts...with any other publishing software you’ll have an easier time. Use free publishing software. That's my official advice. My number one most important advice. 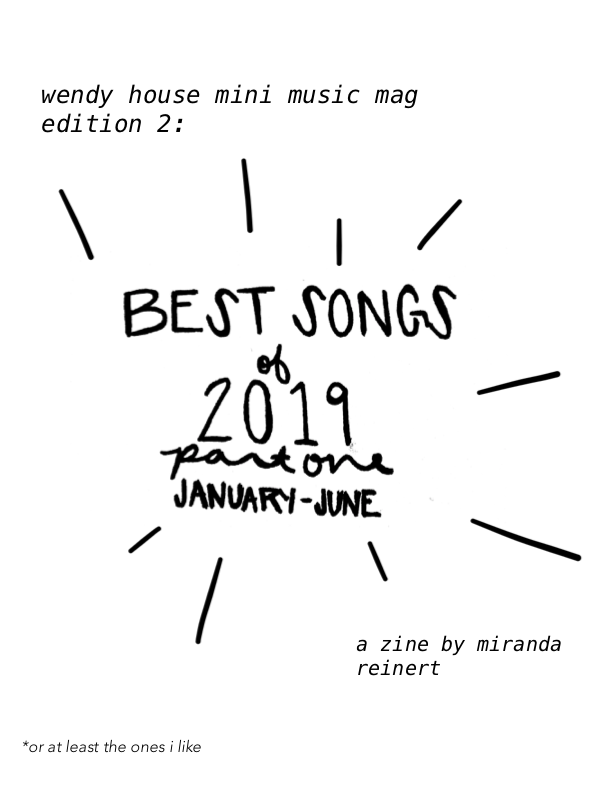 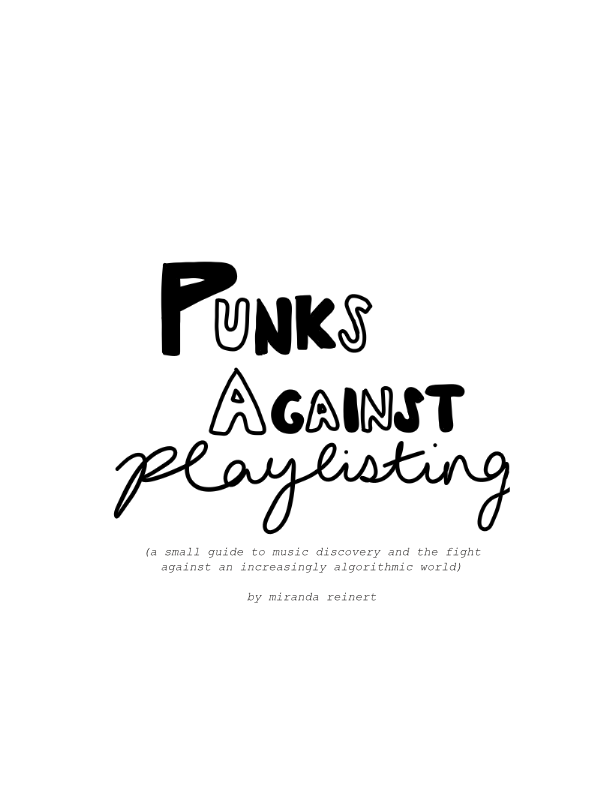 Read Isolationism is a Zine here. Buy Wendy House Press zines here (you can also submit your own work!).

Miranda is @mirandareinert on Twitter and Wendy House Press is @wendyhousepress.